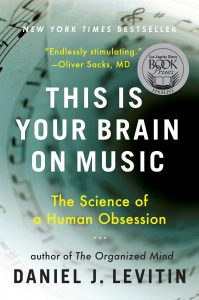 Taking on prominent thinkers who argue that music is nothing more than an evolutionary accident, Daniel Levitin poses that music is fundamental to our species, perhaps even more so than language. Drawing on the latest research and musical examples ranging from Mozart to Duke Ellington to Van Halen, he reveals:

How composers produce some of the most pleasurable effects

• of listening to music by exploiting the way our brains make sense of the world
• Why we are so emotionally attached to the music we listened to as teenagers,
whether it was Fleetwood Mac, U2, or Dr. Dre
• That practice, rather than talent, is the driving force behind musical expertise
• How those insidious little jingles (called earworms) get stuck in our head

A Los Angeles Times Book Award finalist, This Is Your Brain on Music, will attract readers of Oliver Sacks and David Byrne, as it is an unprecedented, eye opening
investigation into an obsession at the heart of human nature.