In the Garden
By Judith Cox 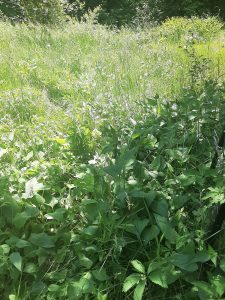 After my mother died in October 2011, the summer of 2012 saw me transplanting glorious perennials from her peaceful sheltered zone five garden to my harsh, hard-scrabble garden. I attempted a small formal garden in her memory, but the weeds continually encroached over the years, and I became discouraged. But in mid-August of 2020, I heard a podcast about turning a lawn into a meadow, and the light came on—I would make that garden area into a meadow! Because of that podcast (A Way to Garden with Margaret Roach), I bought the book Lawns into Meadows: Growing a Regenerative Landscape by Owen Wormser and started to plan.

The first thing I did was mark off the area to use. On one corner of the grid was a young bladdernut tree, and since it is native, I left it, but all the nonnatives had to go. My mother’s garden had been cottage garden style with drifts of daylilies and big blousy peonies. The lupins spread throughout were not the native Lupinus polyphyllus. The perennial geraniums were not the native Geranium maculatum either. As I was cataloguing all these nonnative plants in this weedy garden and deciding where to move them, I began to discover some tiny native plants. My neglect of the garden had opened up the possibility of more natives moving in. I discovered a sweet tiny aster peeking up between the daylilies and lurking under the peonies. I think it is a whorled aster,
Oclemena acuminata. Another tiny aster I found is most likely a Calico aster, Symphyotrichum lateriflorum. Its pinkish flowers sparkle against the dark soil.

I chose to make my meadow a limited size—I thought about eight by 10 feet would be manageable—because an issue that is difficult to ignore is that I am “gardening while old!” I do the digging and moving by myself and have a limited ability to do so. I wear bulky braces on both knees for stability and move carefully not to play that Rice Krispy snap-cracklepop up and down my spine. I
knew I could expand the area later if I chose, but I wanted to ensure that I got this slice of meadow correct.

The soil was not amended, and while I realized it could have used a lot of new soil, at that point, I did not add anything but a scoop of compost when I planted the little natives. Even after removing
several non-natives, I found that it was difficult to see the area fully. That is when I realized that just letting something grow would not give me a truly healthy meadow. According to the book Lawns into Meadows, I had to cut the grass first to get a good start on planting my meadow. Using the lawnmower was not an option because the ground was hard and had hills, bumps, and holes. A friend with a weed-whacker solved that problem. I directed him around the meadow patch carefully so that he didn’t cut down any of my hard-fought native plants. Once the grass was out of
the way, I could see what needed to be done.

I got a few native plants from friends and started digging in areas that seemed to need some plants. I continued to find various native asters already there. Canadian wild ginger (Asarum canadense L.) was a great addition along with some bee balm (Monarda didyma).

In the fall, I made sure to let the maple leaves cover everything—they make excellent compost and would protect the seedlings. Winter spread its white blanket over the meadow, putting everything to sleep, but when my meadow awoke this spring, it reminded me that Mother Nature abhors a vacuum. I had expected some grasses, and the occasional dandelion might have moved in—both could be easily removed—but that happened in just one tiny corner. The rest of my meadow was not what I had hoped it would be! So many non-natives had invaded the space. The oregano (Origanum vulgare) that I had let wander about in the lawn where the grass wouldn’t grow had happily taken up residence beside several wild parsnip (Pastinaca sativa) seedlings. I found that creeping bellflower (Campanula rapunculoides), a very invasive weed that is such a nuisance in my front garden, had discovered my meadow and was establishing itself. Even a small common buckthorn (Rhamnus cathartica) had decided that my meadow would be an ideal spot. This tree is a highly invasive species that encroaches on woodlands and wildlife habitats. Crawling around
throughout all these invasives were some very healthy wild grapevines (Vitis sp.).

It has turned into a learning experience. I learned that I was smart to choose a small area for my meadow. I am also discovering that while some non-natives are easy to control and are enjoyable
in a garden, others take over whole areas pushing out the native plants. For 2021, I will spend some time each day removing the invasives. I will mow around the meadow to keep it contained, and in the fall, I can get my buddy with the weed-whacker to pay another visit.

It would seem that my meadow is no longer a project that will take a few months; it has evolved into at least a year or more! Although it may seem overwhelming, Desmond Tutu once said, “there is only one way to eat an elephant: a bite at a time.” This meadow is my elephant!

Judith Cox takes great delight in gardening— both vegetables and ornamentals. She has volunteered with the Master Gardeners of Ottawa-Carleton for 10 years.

Decor Tips for a Bright and Roomy Space