Snowshoe bliss in the Warwick Forest 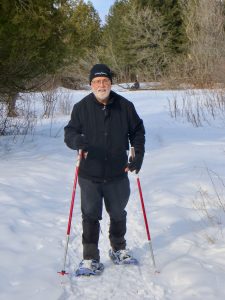 If you can walk, some wag once said, you can snowshoe. In this long pandemic winter, strapping on snowshoes seems a perfect way to exercise, take in fresh air, let Mother Nature minister her restorative magic, and practice social distancing. A first-timer doesn’t need lessons, the sport demands as much or as little stamina as a participant chooses, and equipment is cheaper than skis and lighter than the wooden snowshoes of yore.

Little wonder, then, that U.S. data show an astonishing spike in snowshoe sales of 250 per cent this fall. Ottawa’s sales didn’t fall behind. “We have had to reorder from our supplier many times,” says Alex McTaggart of Kundstadt Sports, “and we are looking at getting more in stock as they seem to sell as soon as we put them online.”

Snowshoeing particularly appeals to older Canadians, says Dave Robinson, who heads the sport’s governing body, Snowshoe Canada. “It’s very simple to do, like opening a can of soup, and it’s very aerobic. You don’t have to go hard, but you still get a good workout. And fresh air is good for your overall mental well-being.”

With encouragement like that, we found ourselves one sun-kissed January day, trekking along the well-groomed trails of Warwick Forest, about fifty minutes southeast of Ottawa. Warwick wasn’t familiar, I admit. That’s why we chose it—to explore someplace new. That, plus its website promise of flat, easy terrain. 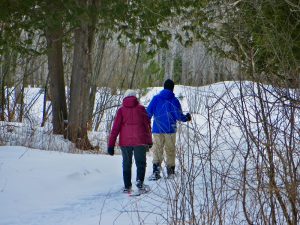 We soon learned Warwick is a demonstration forest, showcasing woodland management techniques that can be applied elsewhere in Eastern Ontario. These include timber production, wildlife habitat, environmental protection and, yes, recreation, which meant conditions would be top-notch.

The six-kilometer trail, shared with the occasional cross-country skier and snowmobiler, took us past clearly differentiated stands of trees. To one side was a rainbow of deciduous species: red maple, white elm, green ash, black cherry. On the other side, we passed cathedrals of white cedar, white pine, white spruce. I couldn’t have identified most of them, especially in winter, but an interpretive brochure we’d downloaded beforehand helped. It took no expertise, however, to see some tracts were planted in tidy rows while others were naturally haphazard. Nor did we need a biology degree to find pervading calm.

Greater experience in animal tracking might have helped us spot resident wildlife, though. It’s rich with critters, thanks to the forest’s 650 hectares, unusually large forest cover for this region. The forest is home to white-tailed deer and raccoons, and folks have observed birds as diverse as the Cooper’s hawk, wild turkey and black-capped chickadee. We found none of them, though, even if bare branches made bird
sightings easier. 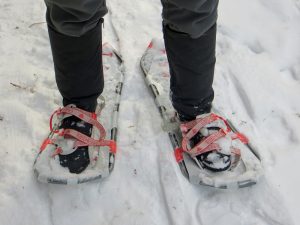 But we did spot tracks (a moose, perhaps?). A scattering of blood suggested some poor animal had suffered a recent wound. Through the year, the forest attracts mink, ducks, geese and songbirds—thanks in part to wetlands there. That makes Warwick a four-season destination.

We learned, too, the forest wasn’t always a forest. In colonial times, trees were harvested for such industries as shipbuilding, and in the 19th century land was cleared for farming. Alas, the soil was shallow and poorly drained. Agriculture was abandoned by the 1930s. One remnant of settlement, however, is an old stone fence. It’s a reminder of just how tough settler life was.

After the land reverted to public ownership, about a million conifers were planted. Today it’s managed by the South Nation Conservation
Authority, which protects the 4,000 square-mile watershed of the Nation River that meanders from its headwaters around Brockville to the
Ottawa River near Plantagenet. (They’re the folks who also maintain such green spaces as the boardwalk at the Alfred Bog and the Moose
Creek recreation trail.)

For Warwick Forest, named after a pioneering Eastern Ontario forester, public education is part of the mission. Our brochure explained one experimental area, for example, where foresters had treated hardwood growth in different ways, thinning mature trees and saplings by varying amounts. The purpose: to see which practice produces the best trees. At another stop, we learned poplars help white pine trees resist weevils. This didn’t make us forest experts—I doubt we’d have discovered any of it without our brochure—but it made us more aware of the benefits of forest management.

And trekking on snowshoes made us aware of the human benefits that come from a few hours in nature’s playground.

Snowshoe Here, Too Dave McMahon, a two-time Olympics bi-athlete who runs the Natural Fitness Lab in Chelsea, is no stranger to snowshoeing. For other senior-friendly snowshoe locations, he recommends:
• Larose Forest near Bourget. Dave says it has a beautiful trail system through flat terrain: “Single track winds through the forest. Shared with fat-tire biking.”
• Kanata Lakes (West March Highlands). “Extensive trail network. Variety of loops to explore around ponds and rock ridge. Minimal elevation gain. Map required.”
• Gatineau Park. “Over 100 kilometres of official snowshoe trails (separate from ski trails) of varying length and difficulty. Expect more climbing than other places. Some trails are shared with fat-tire biking.” 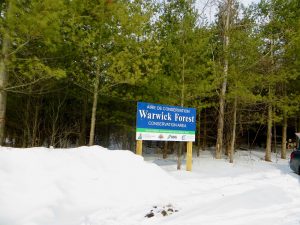 Warwick Forest is along County Road 9, five kilometers east of Berwick. Watch for a parking lot, marked by a sign, on your left. (Berwick lies between Winchester and Moose Creek, south of Crysler.)

Follow health protocols: visit only with household members, maintain appropriate distance from other visitors, keep dogs on a leash, and remove your trash. The South Nation Conservation Authority monitors visitation with car and trail counters and regular inspections.

There are no facilities at the forest. Borrow snowshoes, or rent them from sporting goods stores, although the pandemic has stopped that service at some outlets.

For a light meal, try Cup of Jo’s, in nearby Winchester’s oldest stone house (515 Main St. W.).The café specializes in desserts, but serves tasty lunches, too.